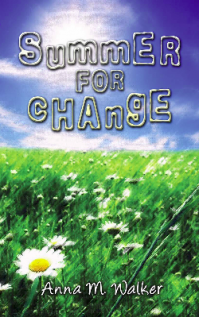 Summer break is supposed to be a wonderful time, full of great memories. So why is Layla's becoming such a nightmare? Everything starts with the discovery that her life-long enemy, Sean Patrick, will be working for her father all summer. Problem after problem arises. She tells herself things couldn't possibly get worse.  Until one Wednesday morning she takes a tumble down the stairs, fracturing her arm. The doctors are positive it was something more than bad vision that caused her to miss her step.

Will Sean take the first step and seek to mend their relationship? Will Layla be able to forgive him of all past sins and allow him to shine a light of hope into her nightmare?

What others have said about Summer for Change

The author writes in a way that draws the reader feel a part of the story, as if the characters are real-life friends.

Summer for Change is beautifully written! The storyline is marvelous. Never before have I read anything that makes me want to read my Bible.

Summer for Change is not your typical high school love story. This is a story of true love that never faces and holds no matter what the odds. Remember God can do anything.

Anna M Walker paints a vivid picture where every detail is accounted for. Not many writers do this anymore, which is a shame. A beautifull, original romance.

"Lay come on. You promised you'd go with me," Vicki pleaded with me this afternoon while she was over at my house. It was Friday; the first weekend of summer break.
"Yeah, but that was before I knew he was gonna be there," I said. I hated backing out of my promise to my best friend. Vicki and I had been friends since, well, since she moved to this hick-town in the third grade. We were pretty inseparable. too. The one thing that we didn’t do together was the Skunk. That’s where she was trying to drag me tonight. Well, that’s where she had drug me.  She just parked her Jeep in the field next to his car.
The Skunk, as they called it, was the Rileys’ barn out on the north side of the county. Blake Riley had been the host since his older brother Travis passed the torch down when he left for college. I guess that was a year ago. I didn’t know why they called it the Skunk; my guess is that one happened by them one night and they were dumb enough to mess with it, scaring the poor thing. Being the beginning of summer break, the college kids were back in town. Some of them were cool, but some had gotten a little too cocky being in the city somewhere. I don't know why I let her talk me into this. It was only because I loved her and she was right, I did need a life.
"I'm not getting out. He's here," I said pointing to the Mustang she had parked beside. It was a beautiful care: candy apple red, white leather interior, and white convertible top, which was down. It wasn't just that I was jealous of his car. It should have been my car. He'd seen me at the lot with my dad talking about getting it. The next week when Dad and I went to bring it home; there he was driving it off the lot. I'd gotten a blue Taurus instead.  It drove well, but I still got a whiff of dead rat whenever I turned the heat on, again his fault.
“Layla,” she pleaded. “Harris is not going to bother you. You shouldn’t let him keep you from having some fun. Look, there’s Tony, go flirt with him; you’ll feel better.”
“Vick, everyone knows you’re the only white girl in this town he wants. I don’t feel like flirting. I just wanna go home and watch a movie."
"No, you wanna go home and pout cuz there's no romance in your life and cuz your life is lame. Whose fault is that?"
"Leave me alone," I said, still refusing to get out of the car. I loved her dearly, but we had our moments.  She left, leaving me alone in the Jeep debating on what I should do.
Summer had just begun, and here I was pouting in the car, not wanting to get out because the person I hated the most was inside. A country song blasted from the barn.  I recognized several friends and acquaintences gathered just outside, talking and laughing and enjoying themselves.  Coming to the conclusion that going inside would be better than sitting in the Jeep all night, I hopped down and started walking toward the barn.
How was I to know that this night would change my entire life?

The Story Behind the Story

This novel started out as only a spontaneous idea that I had over Christmas break.  I was currently in a slump with another storyline I was working on, so as usual I began another story.  I have at least 3 partial stories because of this.  I never thought Summer for Change would amount to anything, but after the first few chapters I became attached to my characters.  I've had one reader tell me that it feels as if one of their friends is struggling with cancer, and I have to say that I feel the same way.  It's like Layla Mae & Sean Patrick are my best friends from a different life or a different world, if I believed in that type of stuff.

Thanks to encouraging reviews from family and friends and those at fictionpress.com Summer for Change has continued and come to completion. I am so excited that it will be coming to print.  Never be afraid of where your dreams may take you.